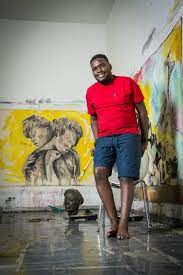 The digital asset sold for 0.7 ETH (Ethereum) online on the Async Art NFT marketplace, a US dollar equivalent of $2 265.

The big break was announced on Async Art’s official site website the same day and was subsequently welcomed as “only the beginning” by the already massively successful esthetics creator.

Non-Fungible Tokens is a blooming off-shoot of blockchain technology and crypto-assets, and African artists have particularly been slow in tapping into this lucrative market mainly dominated by Asian and Western artists.

Greatjoy hopes his break will inspire many young African creators to take a leap and test the market for themselves, expressing an “alarmingly brighter future” in store for African art makers.

His NFT “Burnt Out” spotlights the woes of medical care workers during the height of the global pandemic. Its launch marked a 12-day series of an ongoing “Silent Knights in Scrub Suits Exhibition” NFTs pre-sale on Async Art.

The industry-famed household artist has achieved tremendous straits throughout his 8-year long career in the world of art.

Apart from this successful first-time venture into the world NFTs, Greatjoy Ndlovu holds an immense number of other accolades to his name, within and outside the industry. ‘Great One’ as he is more affectionately, boasts a collection of physical paintings on the walls of big celebrity names like the award-winning Hollywood Producer Ava Duvernay, the maker of the Netflix hit 4-episode series When They See Us.

Greatjoy works also grace the walls of the Absa Group, the Rand Merchant Bank, and various other companies, homes, and hotels in South Africa and across the globe.

As if that is not enough, his story is subject to a collectible biographical book called “The Path to Greatjoy” that he co-authored with writer Ntsikelelo Mzibomvu.

The book gained traction to the extent of being collected by Oprah Winfrey, amongst many others – and the exhibition featured on the popular luxury show Top billing on SABC 3, and subsequently securing several interviews including the Morning Live News on SABC 2.

The Zimbabwean artist is a highly pro-active philanthropist outside the art industry, currently serving as the Ambassador of SOS Children’s Village. He is also a recognized donor of Operation Smile Africa, an NGO that freely offers surgery to individuals with cleft lip and palate conditions around Africa.

Greatjoy Ndlovu’s story serves as an inspiration to any doubtful and hesitant African artist; he claims his courage is what sets him apart and guarantees him success.

Read the original article on 263Chat.