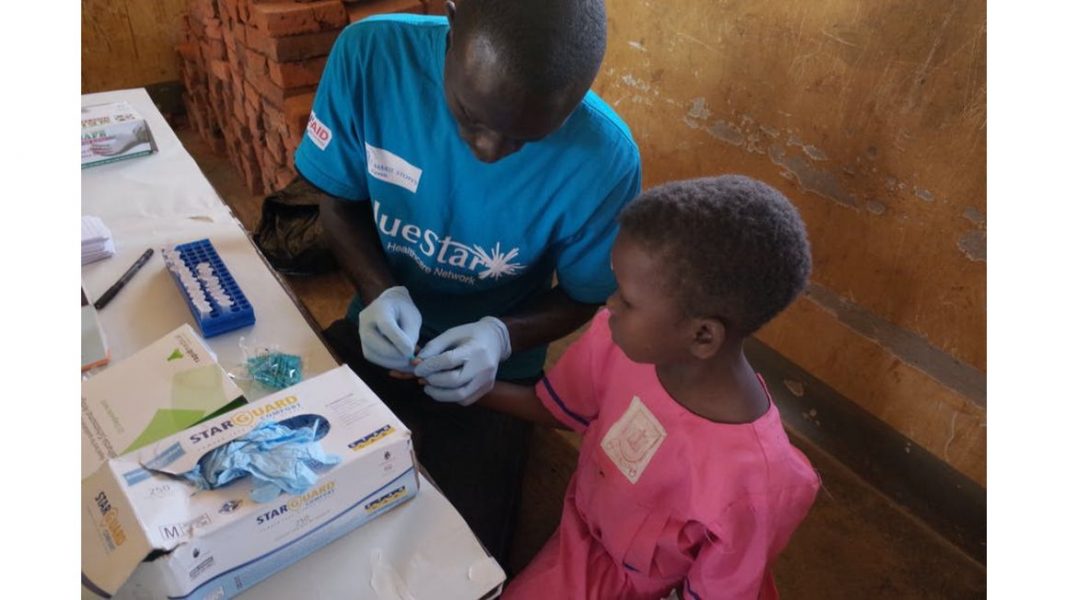 Malaria is one of the world’s leading causes of illness and death. Around 229 million people are infected each year and more than 400,000 of them die.

The spread of malaria can be controlled by careful and coordinated community-based management. This includes the distribution of insecticide-coated bed nets, drug treatment, and diagnostic testing when available. Diagnostic testing is currently done in the field using microscopes or antibody-based tests. In centralised laboratories, tests are done on high performance, automated machines that combine biochemical reagents with the samples to generate reliable and highly sensitive signals.

As a consequence, diagnostic testing can be a challenge in remote areas of sub-Saharan Africa. Here, access to power, running water, specialist laboratory equipment and trained healthcare professional staff can all be limited. Without diagnostics, treatment is either delayed or based on symptoms alone (which are often similar to those of other infectious diseases).

A 2018 World Health Organisation (WHO) report on controlling malaria highlighted a need for fast and reliable testing that’s available even in the most remote areas.

That report also recommended that disease diagnostics be more digitally integrated into regional or national case management systems to better monitor the spread of malaria.

For several years now, bioengineers from the University of Glasgow have been working with the Vector Control Division of the Uganda Ministry of Health. We’ve been collaborating on new ways to achieve these vital WHO recommendations. Together, we’ve made some key advances towards delivering new devices which empower people with basic medical knowledge to administer malaria tests in the field. Our smartphone-based diagnostics test, analyse and record data securely.

The most common and accurate malaria test looks for the parasite’s DNA in a person’s blood using a polymerase chain reaction (PCR). PCR tests require trained staff to take a sample and process it. Tests must be done in laboratory conditions.

More portable and field-ready tests are available. They include lateral-flow tests which detect molecules from the parasite circulating in the blood. But some studies suggest they may only be accurate 75% of the time.

The challenge therefore is to diagnose malaria with the sensitivity and accuracy of the PCR test, using the same simple equipment as the lateral flow test.

To do this, we’ve developed a unique “origami” diagnostic system. It is based on folded sheets of waxed paper and the process is known as loop-mediated isothermal amplification, or LAMP. This is similar to the established PCR test, but easier to use.

We use a common household printer to print patterns made from water-resistant wax onto paper. We melt the wax to the paper on a hotplate. Then, a blood sample taken from a patient via fingerprick is placed into a channel defined in the wax pattern. The fluids and regents move in the paper by capillary action (in much the same way as absorbent tissue soaks up a spillage).

Eventually the sample is transferred to three small chambers in a cartridge that integrates with the origami paper. The cartridge is placed into a purpose built 3D printed cassette, powered using a simple power source (such a mobile phone). It carries out the LAMP reaction to test the sample’s DNA for evidence of the disease-causing parasite.

Our origami system was field-tested at two primary schools in the Mayuge and Apac districts in Uganda. It correctly diagnosed malaria in 98% of the samples. Our finding was confirmed by testing the samples again using the PCR process. The results suggested that paper-based LAMP diagnostics could deliver better, faster, more effective malaria tests in communities.

But that still left us with the second WHO challenge to overcome: creating a digital system which local and national authorities could use to monitor infections.

We believe that Africa’s widespread adoption of smartphones, even in the most remote areas, could be key to empowering people to administer tests and securely share their results with health authorities.

Working with the Uganda Ministry of Health once more, we set out to develop a diagnostic app to pair with our origami diagnostic system.

We used blockchain technology to secure patient confidentiality. The technology ensures that only authorised healthcare workers with the correct “key” can access the results. And it traces all access and decisions securely.

The smartphone is paired with a 3D-printed stand containing a simple heating element. The phone provides the battery power to run the DNA based assay. The app controls the temperature of the origami test.

We also use the mobile phone to analyse the data and tell the healthcare professional what species of malaria the person is infected with. This ensures that the right drugs are correctly administered. Health workers don’t need to be highly skilled.

Results are securely stored on a blockchain-based ledger to ensure their privacy. They are wirelessly shared only with trusted organisations such as regional or nation health authorities.

In collaboration with local educational bodies, we partnered again with a Ugandan primary school to evaluate our new system in the real world. We tested blood samples from children aged between 5 and 12. Again, the results were 98% accurate.

The outcomes from those tests helped children who tested positive for malaria to get timely access to treatment. They’ve also been used by regional authorities to communicate information to central government ministries to inform local disease management strategies and interventions.

The sample size and geographical spread of our research was relatively small. But the technology has already had a positive effect on people’s lives.

We’re planning to continue our work with the Ugandan government. By including new partners such as the Ugandan Industrial Research Institute, we will further develop our diagnostic system. We’ll explore industrial scale to make the prototype systems more widely available.

Ultimately, our hope is that we can give people in areas affected by malaria, no matter how remote, access to effective, easy-to-administer, secure tests. In doing so, we’ll also provide local health officials with new data to help better manage outbreaks as and when they occur. In the future, the systems we’ve developed could help tackle a range of other infectious diseases.